Grab your wand and help fend off a ghostly catastrophe. Press play to swipe spells, save your friends, and help restore the peace at the Magic Cat Academy.

This year’s Halloween Doodle follows freshman feline Momo on her mission to rescue her school of magic. Help her cast out mischievous spirits by swiping in the shape of the symbols above the ghosts’ heads. And you’d better pounce fast—the ghost that stole the master spellbook is getting away!

From the team that created the Magic Cat Academy:
The inspiration for this year’s cat spell-casting game came from a real-life black cat named Momo that belongs to Doodler Juliana Chen. It seemed like a good opportunity for a cat hero, since the winner of last year’s Candy Cup Doodle was Yellow Witch and her black cat. 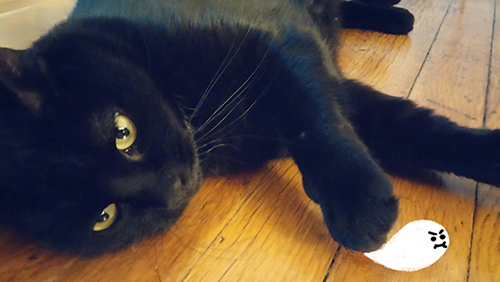 The original concept for the game involved a magic cat making a soup that was so good, it raised the dead. Connecting soup to Halloween proved too abstract, so the team shifted to the idea of a wizard school. This opened the door to a more robust world filled with interesting characters and paw-some themes.

The game includes five levels set in a school environment: the library, cafeteria, classroom, gym, and the building’s rooftop. We had lots of fun ideas for the resident foe of each level, including a chef ghost, a venn diagram ghost, and a big whistle ghost that summons other spirits.

Doodling for a whole Doodle game was very exciting for us. We had so many ideas for elaborate symbols to draw, like a witch’s hat that would appear on the character’s head after it was drawn! In the end we decided that for a short game against the clock, simple was better. Plans like the “Eiffel Tower spell” were abandoned, and similarly, gag spells didn’t make the cut. Regardless, we loved the process of dreaming up the possibilities.

That’s all for meow. We hope that every human, creature, and ghost has a purrfectly magical day. 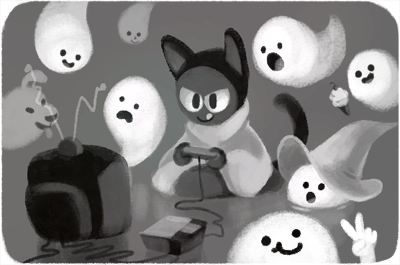 ✨ Thanks for playing our game! ✨